There has been at least 2 different bands named Winning.
1. A Canadian rock band.
2. A Bangladeshi band from the 80’s.

1. A Canadian band featuring Jack Duckworth of Radio Berlin, alunared, & Primes along with Andy Dixon of Ache records, Secret Mommy, The Red Light Sting, The Epidemic, DBS. Winning plays rock music with a serious twist, influenced by improv bands as The Ladies, Hella, Holy Smokes… be it slightly more at ease and less noisy. Their first album This Is An Ad For Cigarettes was released on Dixon’s label Ache Records in 2006, and followed up with Could We Believe In Magic? in Febuary of 2008.

2. During 1970-1980 some of the band members of Azam Khan (the King of Rock in Bangladesh), decided to compose their own songs. And when they came up with some excellent new tunes they planned to form a new Band of their own. On the 1st Day of January 1983, they formed the band Winning. The lineup was as follows:
Haider hussain – Guitar and Vocal
Mitul-Vocal and Guitar
Ranjan-Drums and Vocal
Shelly-Bass
Rana-Keyboards
Fahim-Vocal (English)

During 1984-1985 there were some changes in lineup. Mitul, Haider, Fahim and Rana went USA for education. Haider came back in 2000 and continued his solo career successfully.
Lineup:
Babu-Guitar and Vocal (joined 1985)
Reza-Rhythm Guitar and Vocal joined in 1985
Reza khan-Guitar and Keyboards(1985-1986)
Biplob-Keyboards joined in 1986

During the year 1988 Ranjan had an accident when he was playing cricket as wicket keeper. He broke his fingers and couldn’t play drums. To continue gigs Winning requested Tipu(Warfaze) to play as a guest member.
1989-1991 was crucial years of Winning. They composed 12 songs ready to record and launch their very first album. Winning also appointed their good friend Shajal as band manager who negotiated various shows and the first album with Sargam. The first album was named as self titled “Winning”, at this point there was a slight changes in their lineup in 1991, as Babu and Reza left the band:
Chandan-Vocal and Guitar
Ranjan-Vocal and Drums
Shelly-Bass
Biplob-Keyboards
Tipu-Drums
Shajal-Manager

Winning released their first debut album in July 1991. There was another major change occurred during the year 1994, as Shelly left for his career in Tea garden in Sylhet, Ranjan decided to ease from music and Shajal got busy with his business. Mobin (May Allah bless his soul) joined the band as bass guitarist.
The 2nd Album was released in 1994 with the album title Ochena Shohor.

Emon left the band in 1998 for personal reason. At that time Chandan went UK for a year to get higher education and came back in 1999. During this year Winning could not continue their regular activity.
Winning reunited in 2000 and made a strong comeback performing at Nescafe Unplugged at Sheraton with enormous response from their fans. At this time Winning continued their performance with the guest drummers Tipu (Warfaze) and Raju (ex-KOZ).
In July 2000, Chandan migrated to Canada and met Ranjan there, one of the founder members of Winning, who had also migrated to Canada. They decided to reform Winning again in Canada and asked permission from the members in Dhaka. However, members in Dhaka also took initiative to continue the band in Bangladesh. As a result, two different lineup established in two different countries, amazingly both lineup produced and released their album in 2003 with all the old songs mostly tuned by Chandan. After a while the lineup in Dhaka discontinued for various reasons.
Winning in Canada continued their activity since 2003 on a regular basis. Winning in Canada performed in Toronto, Montreal, Ottawa, Windsor, Detroit, Virginia, Texas, Kansas, Pennsylvania and many other province and states in North America mostly in Bangladesh community. 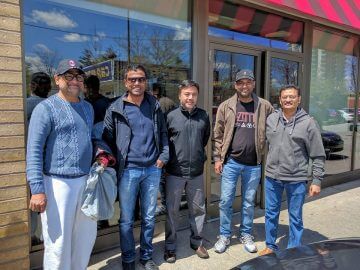