The Epic Voyage of SOULS

It was a post war phenomena in the beginning of 70’s era, after the independence of Bangladesh , a group of boys inspired by western ROCK music decided to form a Band naming it Shurela meaning “in tune” . Shurela was founded in the year 1972 . A year later the band was renamed “SOULS” marking the birth year of the legendary Band 1973 . The founder members were Subrata Barua (Ronny ), Sajed-ul-Alam and Mumtazul haque (Lulu). On their invitation Naqib Uddin Khan, Tapan Chowdhury, Ahmed Newaz, Tajul Imam, , Rorenzo Paul , Rudy Thomas , & Shahed-ul-alam joined the band . Towards the mid seventies Lulu & Rorenzo left and later Rouf Chowdhury joined in .

SOULS in it’s early days played in clubs and houses, playing mostly local and western cover songs. The boys were gifted and felt the desire to create. They started to compose their own music, a fusion of Western Rock , Eastern contemporary and folk music led by musician composer Naqib Uddin Khan. This inspired them to participate in the Bangladesh Pop Competition and achieve the best band award in 1975 . SOULS in this decade made their literal maiden voyage in the luxury liner ” Hizbul Bahar” to the far east.

80’s were the eventful years of SOULS when the band achieved their towering popularity. 1980 was the year when, Naseem Ali Khan joined the band as vocalist, Shahbaz khan (Pilu) joined as drummer followed by Ayub Bachhu as lead guitarist . The 80’s line up were Naqib, Tapan, Naseem, Bachhu, Pilu , Rony, Rudy , Shahed, and Newaz. Their first album released in 1982 was ” SUPER SOULS”, this was the first band album ever released in Bangladesh. The use of western instruments like guitars drums keyboards generally used by the” rock n rollers” of the west was a fresh sound to the audience when fused with bangla lyrics and tune . Songs like Mon shudu mon chuyechey, Nodee eshey poth, Shukh pakhi, Dorgaye mom jeley, Torey putuler moto korey shajiye, was not only raging hits, it was a turning point of contemporary bangla music and became a milestone of modern music in the country. The media termed this new musical trend as “BAND MUSIC”. SOULS started hitting the national media, BTV and secured headlines in dailies with their series of concerts in Shilpa Kala Academy , Universities, Schools, Colleges & Open Air venues. The leading composers for the Band were Naqib Uddin Khan followed by Ayub Bachhu. Soon after Naqib Uddin Khan , Shahbaz Khan (Pilu) & Shahed left the band to pursue their career towards middle of the 80’s when Raliegh Pinero & Shuhash joined in. This decade witnessed SOULS releasing four successful hit albums marking a unique signature in style lyrics and music. SOULS now became a household name.

Towards the end of 1988 Partha Barua was introduced to the band . Partha had a keen focus in Contemporary Bangla Music combined by his interest in Western music and soon started to compose for the band. In 1989 SOULS lost their lead guitarist co singer and composer Ayub Bachhu who left the band to pursue his own ROCK music followed by Tapan Chowdhury who started a parallel solo musical carrier of his own.

The 90s were trouble waters for SOULS as they reorganized slowed their pace and gathered strength. In 1993 SOULS released their 5th Album “Ay Amon Porichoy” where Tapan made a brief comeback and left again permanently along with Rony & Newaz. SOULS now was faced with the massive task of keeping up to the fans expectation without the stars Tapan & Bachhu. The line up of this decade was added by Lutfur Kabir (Azad), Naimul Hasan (Tanim) , Jewel Pantha & Md. Iftikher Uddin (Ifti) led by Naseem and Partha.

The spirited members did not loose hope but filled with new strength and aspiration released their fateful album “Aj din Katuk Ganey”. This album set the sails again for SOULS , the album was not only a blockbuster but was again successful in creating a new dimension to it’s music flavored by powered cords , variation of rhythm and ballet rock . Keno aye Nishongota, was a tremendous hit followed by Chayer cupey porichoy, Aree majhey, Bastota, Oshanto Ridoy etc. The new glory and the change of time set SOULS on their new voyage. Concerts were now in the stadiums and open air venues where audience attendance went up to fifty thousands and over, the climate was set for rock festivals where many other bands joined the shows. Jewel and Azad left and in came in Ashiq and Masum The vocals for the band now were Partha & Naseem they played and sang on to glory sailing steady into the change of the millennium, releasing eight more successful albums.

With the entry into the new millennium (2000) SOULS ‘ music has blended into a new distinct dimension but has retained the signature of melody it has carried throughout it’s travel in time. Here Tanim left the band replaced by Zakir hasan (Rana) on the bass guitar. 2006 brought SOULS the best band’s award given out by “Meril Prothom Alo” Star Awards . Adding to regular appearances in open air concerts, various TV channels, Souls also started performing for cultural exchange programs of the state. Their appearance in Indira Gandhi Cultural center paved their way to participate in the South Asian Band Festival in Delhi and Jaipure. They made a tour of USA and performed in New York , New Jersey, Florida and L.A. In 2012 Rana left and was replaced by Real in bass & Tushar in Percussion.

We have today turned the fold of yet another decade and have stepped into 5th decade of SOULS journey. Our voyage in time has taught us to respect the changing seasons, we change gears to blend with the ever changing pace but never give up the signature of melody we have achieved. We are the ‘SOULS’” We are travelers of time seeking melody to quench our thirst ” 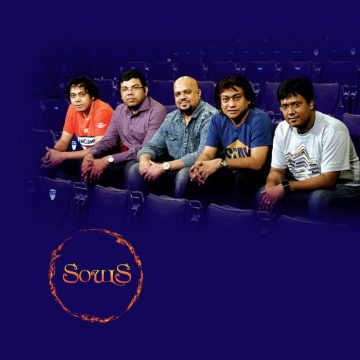