Profile: Waves was formed in Frankfurt, Germany on December 25, 1981 by three Bangladeshi Teenagers Iftekhar, Mahmud and Mithu. Waves is the pioneer of Heavy Metal Music in Bangladesh.

Waves became the Heavy Metal Powerhouse in Dhaka, covering classic bands like AC/DC, Motorhead, Kiss, Black Sabbath, Qeen, Scorpions and many more for the first time in Bangladesh. Instead of performing contemporary pop music like many others in the 80s, Waves revolutionized the band music in Bangladesh by performing Bangla metal in a manner that no one dared try before, using its own 32 channel Public Address system, Marshall amps, Gibson guitars and dozens of mics on stage. Waves became overnight sensation after performing its first concert in 1984 at Shilpokola Academy and followed by more at Sishu Academy, Engineers Institute, Guide house and BTV.

In 1984, Waves recorded 3 songs for BTV for its upcoming Eid show but BTVs GM called the entire show an “Opo-Shankscrity” and decided not to air Waves. Following that incident, Waves was banned from performing at the venues in bangladseh including BTV. Many line up changed happened while some of the members moved abroad.

In 1995 the band recorded its first studio live album just in 4 hours session at Audio Art studio. Once again, Waves was the first band in Bangladesh to release any live album. “Purono Shrity” became a popular bangla rock album with its hits like Bhore, Monisha and Shrity. Vocalist Mushfiq left the band following release of “Purono Shrity” & the band re-recorded part of the album for a video session. 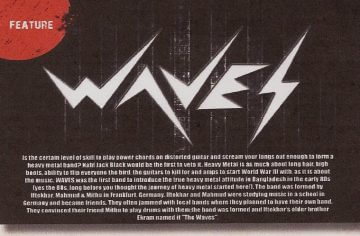