Artcell was formed around November of 1999 by Ershad, Lincoln, Cezanne and Shaju who were friends from their high school days. From formation, the lineup has not changed yet. They used to get together to practice some Metallica stuffs and started performing them for other friends and thus it all started. Artcell was thought as the name for a cultural movement of a friend circle; working collectively on different mediums of art like music, literature; with a similar kind aesthetic philosophy. So the band is not limited to the four founders only. Artcell is all about the friendship of few peoples of the same age, growing up together.

The first song the band composed was ‘Onnoshomoy’. ‘Onnoshomoy’ made them believable in believing themselves. The song set the standard for all the songs yet to come along the way. The first song released by Artcell was ‘Odekha Shorgo’ which was recorded for the great Azam Khan for a mixed album he was planning on. But later it was released on a mixed album called “Charpotro”. The song ‘Onnoshomoy’ was written by Rumman Ahmed and ‘Odekha Shorgo’ by Rupok. Both Rumman and Rupok are very close friends of the band members; and together they wrote most of the songs for Artcell. But unfortunately, Rupok, passed away after being infected by the fatal disease called ‘Cerebral Malaria’ on 2002. This incident changed everything. It changed their feelings that made the band sound much older than they actually were.

Rupok left when the band was working on their first solo album ‘Onno Shomoy’, which was later released and was dedicated to Rupok on 2002. And after four years of releasing ‘Onno Shomoy’; Artcell came up with their second album ‘ Oniket Prantor’ on 2006. The band is yet to come up with their third album. Due to some personal reasons Shaju and Cezanne is currently settling at Sydney. But despite their absence, Lincoln and Ershad is carrying on with Artcell with guest members. The band is going to release their third album very soon with the original lineup. 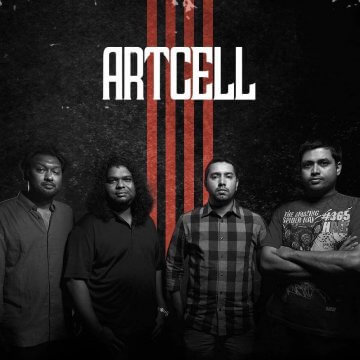